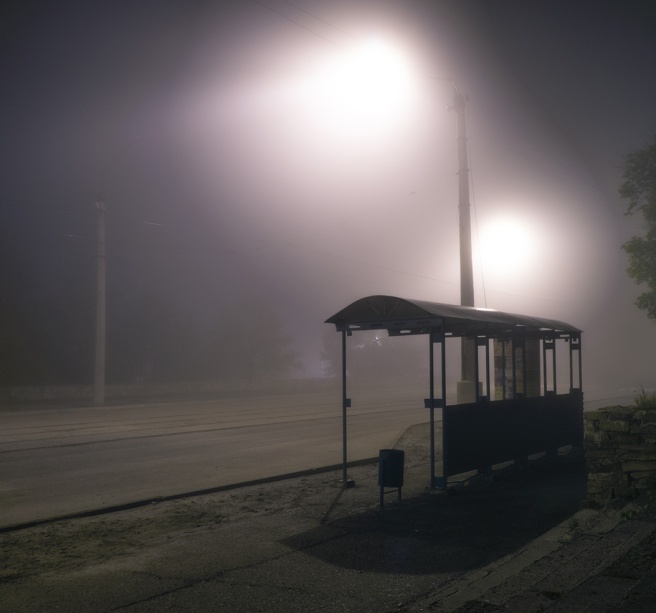 Asked to pick a color to represent this day, the most likely answer would be, “grey.”

January had washed the colors from the trees growing along Lemp avenue and Cherokee street. Banks of graphite-colored clouds obscured the sun, reducing the palette of the cityscape to almost monochromatic hues, and produced a misty precipitation that was not quite fog, not quite rain.

I drove past her on my morning commute. A few blocks from the more traveled roads, this part of the city is a mix of small shops (some in business, many shuttered), residences, taverns and abandoned warehouses. At this hour, nothing was open. She stood alone.

Exceptional only in her ordinariness; neither old or young, fat or skinny, pretty or ugly. She could have disappeared into any crowd, in any city, her plainness granting her the gift of anonymity.

She held the handle of a two-wheeled cart,  strapped to it, a neatly packed duffel bag. Next to her on the bench was another fabric bag, smaller in size and rectangular in shape. A navy hoodie, layered over a plain grey sweatshirt was her only defense against the mist and the early winter temperatures. Long dark bangs were pulled to one side, plastered to her forehead by the dampness.

She was unusual in one respect, she was not looking down at a smart phone while she waited. Head erect, she stared straight ahead, not looking to make eye contact with anyone, her expression equal parts defiance and resignation.

What was her story? Was she running  from someone or running to someone? Did this city bus trip signal the start of a much longer journey? What life’s chapters were opening or closing?

I will never know her name or her story, it was the briefest of passings, but as I left her disappearing in the rear-view mirror, a simple three-word phrase came to mind.

On May 6, 1937, announcer, Herbert Morison and his engineer, Charlie Nelson, had been assigned by a Chicago radio station to cover the arrival of the Hindenburg in New Jersey. As the Hindenburg caught fire and crashed in front of him, Herbert did his best to control his emotions and describe the scene. This was part of his dialogue, “It’s burst into flames! Get this, Charlie; get this, Charlie! It’s fire… and it’s crashing! It’s crashing terrible! Oh, my! Get out of the way, please! It’s burning and bursting into flames and the… and it’s falling on the mooring mast.” And then a few moments later he said these three words that went down in history. “Oh the humanity.”

I’ve always wondered why Mr. Morison choose those particular words. Other choices come to my mind, but then I’ve never experienced dozens of people dying in front of me. Clearly he did not plan that phrase, it burst out of him propelled by the raw emotion of the moment.

There were no live broadcasts at that time. Charlie recorded Herbert’s coverage of the event on a 16 inch lacquer disk, which was flown back to Chicago that night to be broadcast. The next day, portions were rebroadcast by NBC. It was the first time that recordings of a news event were ever broadcast, and also the first coast-to-coast radio broadcast. Morrison’s quick professional response and accurate description combined with his own emotional reaction have made the recordings a classic of audio history.

Over time that expression has become a cliché, a meme, and I’m sure many of the people using it today could not tell you of it origin.

This morning as I passed the lady in the mist, “Oh the humanity,” came to mind. It was not born of condescension or pity, just a recognition of two of God’s children, on different paths, but passing within a few feet of each other.

Before I reached the next intersection, my thoughts jumped around like a frog hopping from one lily pad to the next. There are hundreds of us humans within a few square blocks, hundreds of thousands in this city and countless millions across the planet. Individuals all … each with a unique story, each with their own collections of hopes and dreams, experiencing triumphs and tragedies both great and small on a daily basis. What a species, … we float between Mother Theresa and Jeffery Dahmer, or to put it another way, between angels and demons, “Oh the humanity.”

I arrive at the office feeling small, but relieved that yet again, I can throw myself into the arms and grace of a loving God. A God who understands, has the capacity and desire to care about us on an individual level. The capacity to understand humanity is beyond me. Most days I struggle to understand myself. That “caring” thing? That too is a struggle as my worldview is decidedly myopic. But I sure wish I had offered a cup of coffee or hot chocolate to the lady in the mist. 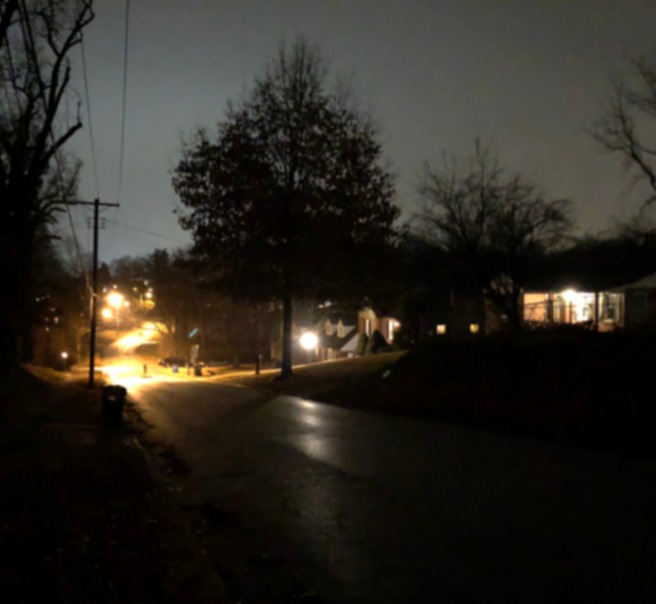 It was a “cartoon Monday.”

It’s a phrase I use, but frequently find myself having to explain.

If you were to draw a single frame cartoon that exemplified a “Monday,” what would it look like? Since we are dealing with clichés, this drawing would not depict a bright sunshiny day filled with singing bluebirds, beds of blooming flowers and smiling bunnies. This illustration would show grey skies, clouds, muted colors and a slight drizzle if not a steady rain.

Mimsy was not in the least bit upset with the weather. For the first time in days, it was above freezing and unlike last night, she did not balk at going outside. In the spirit of full disclosure, Mimsy can be a little prissy. Bred to be a companion dog, all she wants is to be with her humans … as long as her humans are in a warm, dry location. Last night this human had to take her out in a very cold and persistent rain. Mimsy can’t speak in the traditional sense, but she can make her feelings known. We negotiated about walking in the freezing rain. She communicated that this journey was unnecessary, she would be willing to stay inside, spare both of us from getting wet, and just pee on the carpet. I told her, while I was not keen about going out in the rain, peeing on the carpet was not an option. Since Mimsy weighs all of 12 pounds, I won that debate.

Tonight though, she had no such qualms. It was a very pleasant walk.

I could see my breath hanging in the air, but it was not the bitter cold from the previous week. It’s this time of year that I promise myself never to complain about the heat in July and August. Those months can be sweltering and hot, but they don’t hurt. When it gets down to 0°, it just plain hurts. But that was not the case tonight. After the prior week, 36° felt positively balmy.

We ambled down the side-streets near our house. There was a slight mist in the air, not quite fog, maybe fog-light would be the best description. It softened the edges of everything it touched, placing a slight glow around the street lamps, creating a nocturnal impressionistic streetscape.

Mimsy and I have experienced better and worse strolls. As with most things in life, it’s a matter of perspective. It was a cartoon Monday, but that’s not always bad.