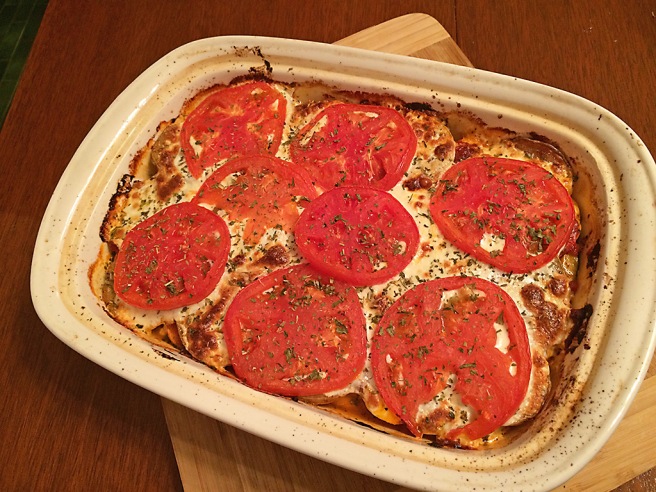 On the afternoon of a predicted winter advisory I did what everyone else in the Midwest seems to do when there is a threat of bad weather … run to the grocery to buy stuff I don’t need, but could need if things get really bad. Among the items I purchased, an assortment of pasta, cheeses and a 3 1/2 pound bottom round roast.  Perhaps it was that nice big chunk of red meat that guilted me into doing something with vegetables.

I remembered seeing a recipe recently that had layered some baked vegetables with roasted beefsteak tomatoes on top. Now the odds of me finding some homegrown beefsteak tomatoes in February at my present location were about as likely as me picking some winning lottery numbers, but it got me thinking. So I set out to procure enough vegetables to create  Poppy’s “Layered Veggie Thingy”. The sweet onions were on sale, grabbed some … potatoes seemed hearty, tossed in a bag of golden potatoes … zucchini and yellow squash looked a little pathetic, but I snatched 2 of each anyway … eggplant, no brainer, as close to meat as you can get in the veggie world … and while I couldn’t score any beefsteak tomatoes, I grabbed the biggest tomatoes I could find in February at the local grocery. Knowing my family as I do,  a 100% pure veggie main dish might be a hard sell, so I added a package of fresh Mozzarella cheese to the collection.

Once home I melted 2 tbsp. of butter in the bottom of an 8” x 12” casserole dish, preheated the oven to 400° and started slicing. I sliced all of the vegetables about an ⅛” thick except for the eggplant and tomatoes which were closer to ¼” thick. 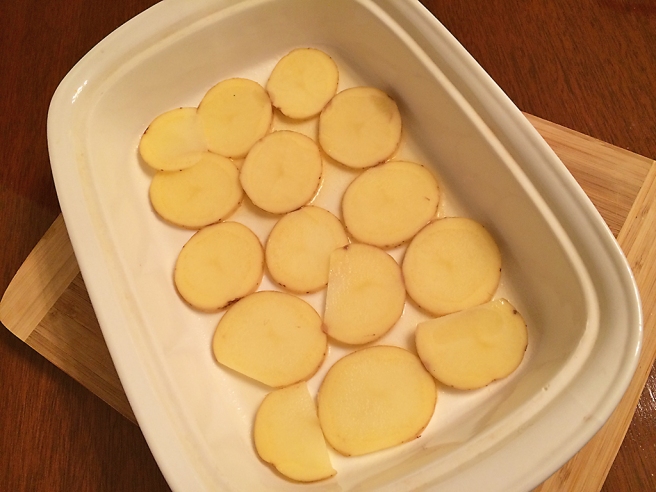 next come the onions …

Followed by the yellow squash topped by the coarse ground pepper (a generous amount ) then spread the tsp. of Cajun seasonings on top of it all. I added the Cajun seasonings because I was afraid the veggies might be too bland (it worked). 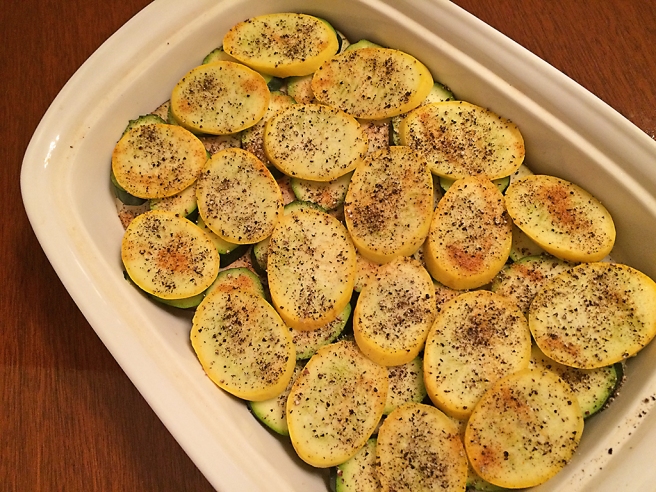 At this point my family was getting hungry and I skipped a couple of photos in an effort to speed things up.

Missing from the photos is a layer of potatoes on top of the seasoned yellow squash. I then brushed on 2 more tbs. of butter on top of the potatoes.

The “Veggie Thingy” is now ready for the oven. During this first phase I baked it uncovered for 35 minutes at 400°. At the end of the cooking time it should be gently bubbling and the edges of the top layer of potatoes starting to brown slightly on the edges.

Removing it from the oven I added the marinara sauce and spread it evenly over the potatoes. Sliced the fresh mozzarella cheese, and place that on top of the sauce …

then topped with  the tomato slices. Place back in the oven (still uncovered) for an additional 15 minutes. When the cheese is starting to brown, you know you’re done. You may want to consider finishing up by turning your oven on broil for a few minutes, say for instance if you are starting to hear comments about how hungry people are, just sayin’.

Sprinkle on some Italian seasonings, let it rest for 5 minutes, pair with some nice crusty bread, wine of your choice and enjoy a totally guilt free dish.

This is awarded Poppy’s “Holy Trinity of Cooking”

What I might do different next time … maybe add some capers or chopped  Kalamata olives and fresh basil if available.

Help! I need another name for this, I can’t keep calling it, “Layered Veggie Thingy”. “Vegetable casserole” couldn’t be any more boring, that’s out. It doesn’t have any pasta in it, so I don’t think I can call it “Vegetable Lasagna”. I’m thinking something with a nice fancy French or Italian word, to make it sound sophisticated. 😉