[McMurphy:] “Is this the usual pro-cedure for these Group Therapy shindigs? Bunch of chickens at a peckin’ party?”

[Harding:]”A ‘pecking party’? I fear your quaint down-home speech is wasted on me, my friend. I have not the slightest inclination what you’re talking about.”

“Why then, I’ll just explain it to you.” McMurphy raises his voice; though he doesn’t look at the other Acutes listening behind him, it’s them he’s talking to. “The flock gets sight of a spot of blood on some chicken and they all go to peckin’ at it, see, till they rip the chicken to shreds, blood and bones and feathers. But usually a couple of the flock gets spotted in the fracas, then it’s their turn. And a few more gets spots and gets pecked to death, and more and more. Oh, a peckin’ party can wipe out the whole flock in a matter of a few hours, buddy, I seen it. A mighty awesome sight.  The only way to prevent it—with chickens—is to clip blinders on them. So’s they can’t see. (Kesey ch.5)

The above scene is from Ken Kesey’s brilliant novel, “One Flew Over the Cuckoo’s Nest”. McMurphy points out that Nurse Ratched’s group therapy sessions are pecking parties. Nurse Ratched strikes one of the men to reveal his weakness, and then all of the patients follow her lead, “pecking” at the man. This starts off a chain reaction that hurts all of the men, sets them all against each other (instead of against Nurse Ratched). The “therapeutic” meetings aren’t a time when patients can provide each other with mutual and beneficial help, but where they end up hurting each other and making it all worse.

We recently celebrated my oldest daughters birthday at “Vincenzos Italian Ristorante”. It has the unique position of being immediately adjacent to the Ferguson Police Station. We occupied a table along the front window and had a clear view of the parking lots of various businesses along South Florissant Road. That night the lots were filled with trucks, lights, microphones and other gear that travels with news crews. My very unscientific census would place the number of media to citizens at about a 10:1 ratio. The news teams seemed very bored that night … there was nothing to peck at.

I am not a blind apologist for everything that has happened in Ferguson over the past few months, but I will continue to be a fierce defender of the good people of Ferguson and our unique community. Ferguson has been a very diverse town for all of the 30 years that our family has lived here. The fact that we are diverse was accepted as the status quo without further thought. The very diversity that was once considered a strength is now being turned against us. In the St. Louis region, Ferguson stands almost alone as an example of a racially mixed town that is not only holding it’s own, but was actually improving.

A year ago most people from our region would have had trouble finding Ferguson on a map, today anyone from across the nation who follows the news can tell you what percentage of Ferguson is African-American and what percentage is white. The recently released DOJ report cites selected statistics that focus on nothing but race … peck-peck-peck.

In a community where race was mostly a non-issue it has now become the only issue.

We have had student groups fly in from out-of-state with banners proclaiming our evilness, then fly out the next day and return to their all white suburbs and go to their all-white churches feeling smug for having made a statement … peck-peck-peck.

We have had no shortage of activists drop by who know nothing about the people of Ferguson but are more than willing to get behind a microphone and with feigned indignation point out our faults to the nation …peck-peck-peck … then collect their offering and leave on the next plane out.

We have had politicians from all levels who have used the events from the past few months as wedges, molded to fit their own agendas, as tools of division rather than using their position to bring reconciliation and healing … peck-peck-peck.

And the pecking party continues. Good honest men and women who have committed no crime other than holding a position with the city are having their characters assassinated … peck-peck-peck.

Ferguson, it’s time to put the blinders on before we peck each other to death!

Profiling does not exist just within police departments but within all of us.

The last known perfect person never visited Ferguson, but said, “Let he who is without sin cast the first stone”.

There is no one perfect in Ferguson. It’s time to put down the stones. It’s time to quit pecking. It’s time to recognize that we are all in this together, black and white, young and old, saints and sinners.

It’s time to cut each other a little slack.

It’s time to once again celebrate our diversity!

The job before us won’t be easy, there is a lot of pain, frustration, feelings of hopelessness that must be overcome. Will we succeed? … I don’t know.

In one of the more dramatic scenes in the book and movie, McMurphy makes a show of betting the other patients he can escape by lifting an old hydrotherapy console—a massive marble plumbing fixture—off the floor and sending it through the window; when he fails to do so, he turns to them and says, “But I tried goddammit. At least I did that.” 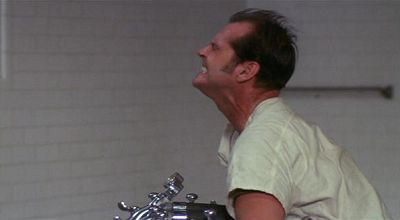 4 thoughts on “Pecking Party in Ferguson”