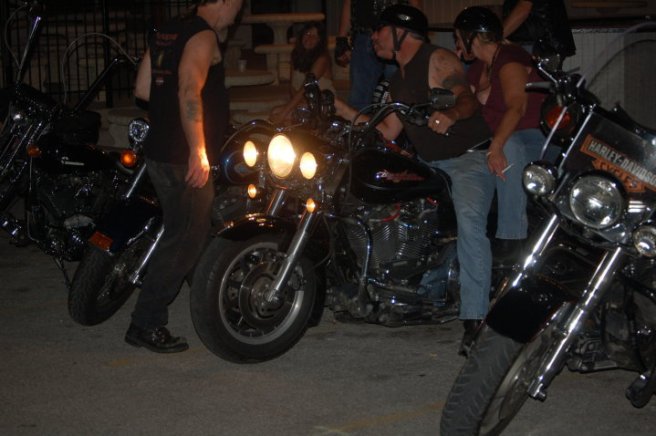 “Sure,” I replied, considering the probability of arriving at either destination statistically the same. Sure, seemed like a safe answer. It confirmed that I had heard her suggestion, but was noncommittal, neither affirming or denying. And it was a whole lot better than the first thought that popped into my head. One should never answer the suggestion of your spouse with the words, “You’re crazy.”

Weeks went by, we drove past the building again. And again the suggestion was made. This repeated itself several more times during the summer. One night, returning home from a party at a friend’s home and approaching the building, the suggestion was made again. This time it was not, “We should go there sometime,” but “I want to go there.” There was a minimal amount of food served at the party we had just left, but ample amounts of wine. This may have played into the weakening of my resolve, but I offered up one last defense. “I’m wearing linen pants, one does not walk into a biker bar wearing linen pants.”

Two minutes later, I was walking through the front door of Cadillac Jack’s … in linen pants.

Let’s put things in perspective, Mrs. Poppy and I were high school sweethearts, got married and spent our formative years in the Pentecostal Church. By any standard we were not worldly-wise. Our experience with bars was limited, not to mention biker bars.

We walked past a pair of burly gentlemen in black t-shirts with the word, “SECURITY” stenciled on the back. I nodded, they nodded … so far, so good. Other than a few guys unabashedly checking out Mrs. Poppy, we attracted no attention at all (if you are going to walk into a biker bar wearing linen pants, do so in the company of a beautiful woman). The decor featured improbably busty young ladies astride Harley’s and the music was loud, but the staff was friendly, the drinks were generous, the food was cheap and we had a blast. So we came back … again and again. We got to know most of the staff and many of the regulars. I believe they adopted Mrs. Poppy and myself, viewing us as something of a novelty. The bar and grill eventually closed down and with it closed a chapter of our life, but along the way I learned a few lessons.

Respect what others hold dear: Every group, culture, club or organization has its rules. Sometimes written, often unwritten. The regulars at Cadillac Jack’s were no different. As a group they were pretty tolerant. Mrs. Poppy and I were there one night when a group of young African-American’s walked in. I confess, that I tensed up a bit. How would they be received in this all-white, blue-collar, biker bar? Turned out it was a total non event. They could have been invisible or wearing linen pants for all the attention they received. But there were some strict unwritten rules in place. The number one rule was that you don’t mess with someones bike and you honor the area designated for bike parking. One night some poor cabbie dropped off a customer and decided to turn around in the bike parking area. Billy, one of the more impetuous regulars commenced to jump up and down on the top of the cab until it exited the parking lot.

Not excusing Billy’s behavior, but your journey through life will be easier when you understand that everyone does not hold the same things precious that you do.  Your taste in music, food, literature, movies or motorcycles will not be universally shared. By accepting that others may have a different value system, your standards are not diminished, but your ability to relate to your fellow humans is greatly increased. This leads me to my next point.

Be comfortable in your own skin: Bill Shakespeare would have put it this way, “To thine own self be true.” I was never going to be mistaken for a hard-core biker, had I pretended to be anything other than a slightly nerdy, graphic designer, wearing linen pants, that first night, I’m not sure that we would have been accepted.

Be honest, who are you most comfortable with? Chances are, it’s with people who are comfortable with themselves. We all know people who are constantly trying to impress others with their knowledge, popularity, status, or cleverness. This causes me to put up my guard and want to spend as little time as possible in their company. The irony here is that they aren’t impressing anyone and it’s likely that your opinion of that person is decreased rather than increased, the end result is the exact opposite of what they had hoped for. Relax and remember these words of wisdom from the famous philosopher, Popeye the sailor man, “I yam what I yam, and that’s all what I yam.”

Treat everyone you meet as an equal: Why? Because they are. Prince or pauper, both are your equal. There is no need to feel inferior to the prince or superior to the pauper. God created humanity in an infinite array of shapes, sizes, colors, appearances and abilities. As a species, we are very broad, but not deep at all. There is no up, there is no down, there is only a thin layer of humanity, exactly one person deep. We all stand with our feet planted on the earth in the form God chose for us. There are people who are better or worse looking by some contrived standard. There are people with more or less money, talent, intelligence and prestige, but there are no humans 2.0, everyone of us are an original 1.0 version, equal in God’s eyes. We are his children … saints and sinners, which is to say, all of us.