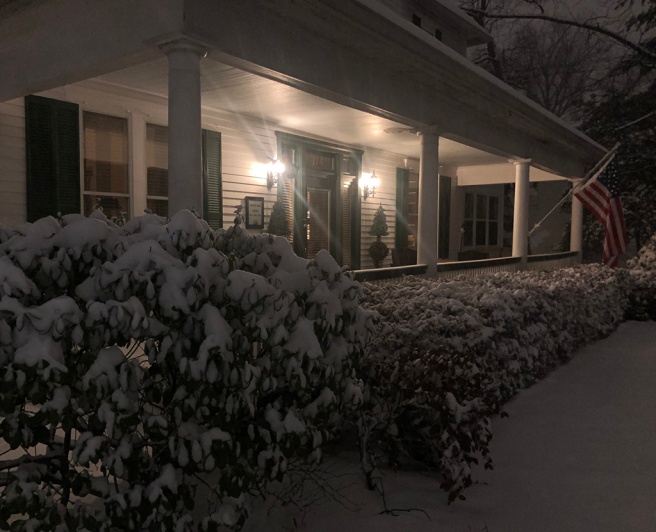 I closed the door softly as I stepped onto the front porch. Nature had dialed down the volume across my little world and I didn’t want to be intrusive or irreverent. In the distance came the sound of someone scraping ice and snow from their windshield. further yet and also unseen, was the drone of a prop-plane struggling to gain altitude. The weather must have forced a change in flight patterns.

My brain somehow made the leap from a snowy January night in Ferguson to 1967 and the summer of love, when Herman’s Hermits released what was to be their final top 10 hit, “There’s a Kind of Hush All Over the World.”

The hush in front of me didn’t extend “All Over the World,” it was real … though not at all what Herman’s Hermits were crooning about. I gave my head a little shake to dislodge the potential earworm. Nothing against the song, but I didn’t want it running through my brain for the rest of the night.

I had the luxury of no longer having to drive or work in the snowstorm, I could take it all in from the security of my front porch. If I lived in Minnesota, I might not feel this way, but here in the heartland snowstorms are not so common as to not have a certain magical quality about them.

Slow down, God tells us, I have provided the perfect excuse to calm yourself, you couldn’t hurry if you wanted to. Listen as I quiet your world. Watch as I soften the light of the street lamps and headlights. Breath deep as my snow filters and cleanses the air around you.

In this part of the country the snow will be gone in a few days. Cars will once again race up and down the streets. The pace of life will pick up, we will once again become frantic over trivialities. The sounds of honking horns and sirens will once again pollute the airwaves, but for tonight … enjoy the hush.