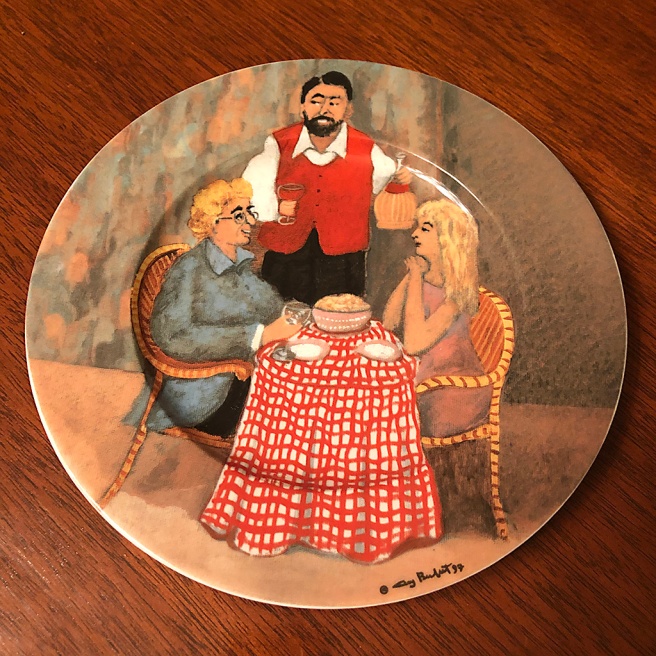 St. Louis is thick with Italian restaurants, ranging from the ridiculous to the sublime. Within that range, on a scale from 1 to 10, I would have given this establishment a 7. Family owned, most of their menu selections created within the restaurant, you didn’t get the feeling that everything served there was loaded off a Sysco truck. It was situated along the service road of I-270, in an unpretentious strip mall, in a slowly declining part of town.

My first meal at that restaurant occurred decades ago. My office at the time was on that same service road. I had gone out for lunch with some co-workers and remember ordering the Chicken Spiedini. This is fairly remarkable since it’s a struggle to tell you what I had for lunch two days ago. Fast forward years later, Mrs. Poppy and myself now live just two miles from that same restaurant. It became part of our regular dining rotation when I wasn’t cooking. Most of the time I would get take-out after work, bringing it home for a relaxed dinner with Mrs. Poppy.

The hostess was a middle-aged woman, her given name was Karen, if I ever knew her surname it is long forgotten. She was nondescript in almost every way. The years and life experiences had softened and rounded both her figure and personality, but her eyes were bright, smiles offered generously, her laugh infectious. We had plenty of time to chat as my orders were prepared. She moved back to St. Louis from Florida to live with her mother after a divorce and a serious stroke left her unable to keep her job in the construction industry. She had connections with the family that owned the restaurant and her sister worked there as a bartender. A hostess job seemed the perfect solution to re-entering the workforce after her illness.

Cavatelli Primavera, Tortellini Alfredo, Cannelloni Bianco, Beef Sotto, and of course Chicken Spiedini were all alternately ordered then boxed for the journey home by Karen. We continued to chat during this process and along the way discovered a common interest … books and literature. She rattled off the names of some prominent and prolific authors, laughed and told me she read a lot of their works after her stroke, not because she was a big fan of theirs, but because the plots were so predictable she felt it helped her brain synapses reconnect. Over the years we debated the merits of various authors and traded paperbacks as my orders were prepared.

More often than not, when I returned home and unboxed the take-out, there would be a bonus package; a serving of cannoli or cheesecake, courtesy of Karen. I was particularly happy when it was cheesecake, because Mrs. Poppy is not fond of cheesecake, alleviating any guilt associated with eating the entire portion by myself.

I entered the restaurant after having been away for two or three weeks. Karen was not at her station. I didn’t think much about it and started to walk over to the bar to place my order when the owner hurried over and pressed a generous glass of wine in my hand. He told me that Karen had another stroke and this time it was fatal. It was a somber meal that night.

I continued to go to the restaurant and place my take-out orders at the bar. They had a dependable group of regulars. Conversation was never lacking. Discussions on weather and politics could be counted on. The state of Cardinal’s baseball was a staple of debate … but no one talked about books.

A few months ago, I returned to the restaurant only to find the lights out, the doors locked and a for sale sign in the window. I was not prepared for the emotions and memories that came over me as I drove away from that shuttered restaurant, and it had nothing to do with Chicken Spiedini.

As I  get older, I am learning about the things that positively effect my quality of life. It’s not about the make of my car or the brand of my clothes. At least for me it is all about relationships.

I am blessed beyond measure to be part of a strong, loving and caring family, my wife, my daughters, my grandchildren. They are my foundation, the bedrock of my life.

I am privileged each week to do meaningful work alongside talented and dedicated co-workers. They and our vocations enrich my life in ways I’m sure I don’t truly understand or appreciate.

I am also learning the value of micro-relationships. The brief interactions with the check-out guy at the grocery store, when he notices my t-shirt and a 15 second conversation ensues about a shared interest.
And of course talking books with the hostess at an Italian restaurant.

Thanks Billy for the title and a great song!